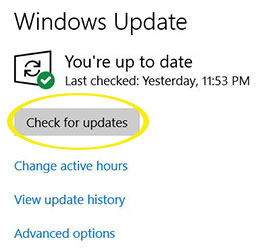 I truly hope that none of the readers of this newsletter were caught by the Windows 10 Update file deletion problem at the beginning of October. Yes, I said file deletion. An unknown number of Windows 10 users downloaded the October update and installed it, and were promptly rewarded with the latest version of Windows 10 – AND – the realization that many of their files had been deleted. The files that the update accidentally deleted were in specific file folders, but the deletions included spread sheets, text documents, photographs and more. This gigantic deletion problem could have been avoided if those who were victimized had merely followed one simple rule: Never go through settings to locate the Windows Update features dialog and then click Check for updates. Let me repeat: Never do that! If you do, and there are updates available at Microsoft, the next thing you’ll be prompted to do is install those updates. If you install those updates, you’ll be missing a crucial testing process performed by Microsoft. And that can lead to all manner of undesirable issues – like the one previously mentioned. SOLUTION: Simply wait until Microsoft automatically downloads your updates and installs them. OR – if Microsoft has downloaded updates, you may be asked to approve the updates and install them or restart your computer to finish the [SAFE] update installation process. The specific options depend on your computer’s settings. These are the safe ways to get your updates. If you ever have a question, just give us a call.

Remember that old saying: if it seems too good to be true, it probably isn’t? That’s a great maxim to bear in mind when/if you’re shopping for a copy of Windows 10. The somewhat ubiquitous operating system has prompted some nefarious persons to create & sell bad copies. Maybe fake copies would be a better term – I’m not really sure which moniker is most suitable. What I do know is that if you buy one, you’ve wasted your money. On the upside, these imitations are pretty cheap, so you won’t be out too much – unless you figure in the embarrassment and/or gullibility costs 😉 The worst place to buy Windows 10, in my opinion, is Amazon. At Amazon you’ll find fraudulent Windows 10 for as low as $9.99 each! Amazon is simply a marketplace, not a store – and as such they put items up for sale offered by various vendors – and they apparently do not vet the vendors or products very well – if at all. I love Amazon, but I only buy name brand items that I can’t find here in Miles City. And I only buy from highly rated sellers. If you want a genuine copy of Windows 10, Click Here. You’ll end up at Microsoft and get to choose the edition you want. It will cost over $100 – but it will work!

Let’s start with how it’s pronounced: meem. When memes actually started is something of a question that’s still in debate, but it was a very, very long time ago – perhaps they came into being as early as the first century AD. Of course, at the time, they were not called memes, but they fit all the criteria for being a meme. The current word is a derivative of the word Mimeme, which comes from the Greek meaning that which is imitated. In today’s tech jargon, it refers to basically that same thing: something imitated and passed around and down to future generations. You’ve no doubt seen many memes: the small boy who had been to the dentist, for example: tens of millions of views on YouTube. Techies pretty much agree the first internet memes took root in the 90’s, before social media. Back then, 600,000 views was considered an overwhelming number. Today, some memes get that in an hour. Okay, my nerd moment has ended – now on to [hopefully] more usable information.

This is Something You Want!

GREAT SEARCH ENGINE! Let me just say, after using this search engine for awhile, I can now honestly say that this is the one the world has needed for several years. The other large search engines are overgrown and both collect and dispense entirely too much personal information, which allows them to determine way too much about users: while this is most noticeable in the political arena, it is actually rampant throughout all categories. Google is the worst offender, collecting your personal data all day every day – and allowing tracking cookies and programs to be loaded onto your machines and digital devices as it sees fitting. DuckDuckGo protects your identity, location – and much more, including preventing invasive cookies from loading onto your system. Since I started using DuckDuckGo as my default search engine, the targeted ads I used to get have been disappearing. [Jump forward 2-weeks: As of this writing, I no longer get targeted ads on any site I visit from Amazon to YouTube.] There are a LOT of reasons to make DuckDuckGo your default (and primary) search engine, many of which are listed at the link at the very beginning of this paragraph, and again at the end of this article. I’ll put one reason below, to give you a brief insight into this great search engine’s benefits:

It used to be that you search on Google and then you click off to the top result. Over time, Google bought more and more companies and launched more and more of their own competing services, favoring them over others in their search results. Google Places instead of Yelp, TripAdvisor, etc. Google Products instead of Amazon, Target, etc. They’re in travel, health, and soon jobs. Anywhere there is money to be made, you can expect them to get into it eventually.

Even when you do click off, Google AMP tries to still trap you in Google. And these tactics are not just on the search engine.

On Android on many implementations there is immovable Google search widget and you can’t even change its search engine if you want to. By just installing it by default, this behavior is a direct analogue to Microsoft putting IE on Windows in the 1990’s, but worse since it takes up more of the smaller screen. The same is true for other Google services on Android as well, forcing carriers to bundle and promote them. We personally have similar issues with Chrome search engine integration.

At DuckDuckGo, we aren’t trying to take over the world. We don’t have an “ecosystem” to trap you in. We just want to help you get to where you want to go as fast as possible, and protect you as much as we can in that process.

Takin’ Out The Trash

Due to a couple of issues we’ve fixed this week, I’m going to include this brief reminder: You MUST empty your Recycle Bin occasionally. If you don’t, it gets very full and can start to affect disk performance – which will manifest itself in slower speeds doing almost everything. To empty it, just go to your desktop and right click the recycle bin icon: usually in the upper left corner of the screen – it will appear very similar to the icon on the right of this article. Then click Empty Recycle Bin – wait until you get a popup asking you if you’re sure – then approve the permanent deletion of the files. Now, it’s back to work!

Reminder: The use of videos in your internet marketing increases purchase intent by 97%. Good to know as you plan and implement your marketing and advertising programs.